So yesterday I finished my last online MOOC course from Coursera in the Psychology of Popularity. Praise must go out to Dr. Prinstein created a fun, interactive and interesting course (the content of which you can still view here).

So, it seems that just like sociology, science and microeconomics, you can learn a lot about the larger world by closely examining one micro-environment under the psychological lense. The adolescent classroom is no exception. And – believe it or not – there are a lot of useful things we can glean from the ‘mean girls’ and the psychology of popularity. I’ve summarised my seven most important insights and learnings from the course here in a previous post but I wanted to take the time to highlight one insight of particular significance to marketers.

Popularity can be seen less of a ladder to climb and more of a spectrum. Most people fall somewhere in the ‘average’ of that spectrum but for there rest, there are the key groups being popular, neglected, controversial and rejected.  Most research into popularity seems to be on these groups and their subgroups – particularly on what effect the outcome of being in those groups has on you in later life, from behavioural issues and depression, to obesity and heart disease.

A number of studies in the U.S.however, also focus on the classic group categorisations of Jocks, Burnouts, Geeks and Populars (I know – I bet that’s seriously fun researching). And in some recent research, highschool students in each of these groups were asked a) how much they think people in other groups did something (e.g. drink), b) how much they did it themselves and c) how much they thought the rest of their group probably did it.

The results were astonishing… 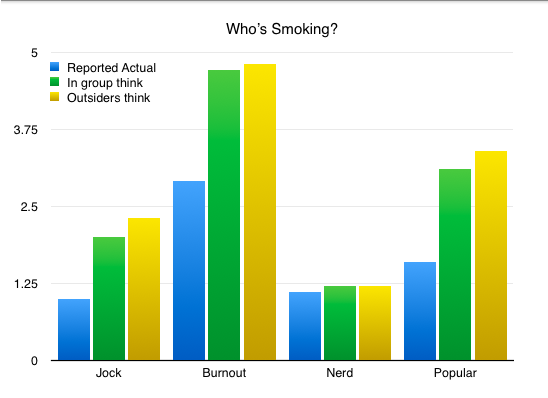 The first thing you will notice is that the ‘reported’ (ie the actual) number of smokers in these groups is different from the presumed numbers. So more teens in this study think others smoke than actually do. But more interestingly, when we look at this again for binge drinking and sexual activity a pattern begins to emerge…

Outsiders vastly over estimate these activities amongst their more popular peers. Even within these groups there is an overestimation of activity levels. They also underestimate ‘uncool’ activities such as studying for the ‘cool’ groups and overestimate them for the nerds, when in reality, there seems to be a pretty level amount of studying going on in all four groups.

What does this teach us?

Well it tells us a lot about social pressures for one thing. While humans tend to be fairly able to accurately estimate other people’s popularity from as young 3 years old, we really, really, suck at estimating just what those people are up to.

Why is this important for marketing?

Well it drives home – with scientific evidence –  one of the most important lessons in advertising:

People like to emulate those they admire (e.g. the populars) but in order to sell them something, you don’t need the popular people to be buying it/doing it/saying it, you just need the masses to think they are doing it. From there it can become a self fulfilling prophecy.

For further details/references on this and other studies, click here.